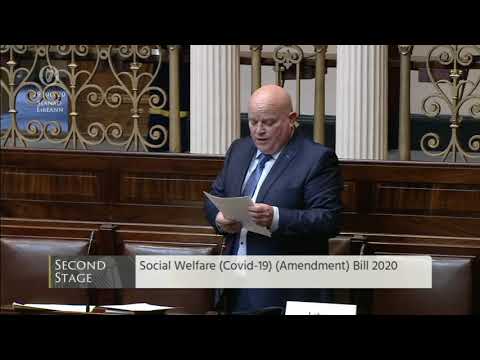 I welcome the Minister to the House I thank her for the considerable work she and the Department have done, particularly in recent months. The Labour Party will be supporting the Bill, as we have done previously.

There is an important inclusion in this Bill, which repeals the section on the pension age, as other Members have said. I thank all those involved in the Stop 67 campaign. They insured that this important issue for so many of our fellow citizens was centre stage on the political agenda and received the amount of coverage that such an important matter deserved. I want to use this opportunity to thank and pay tribute to the National Women’s Council of Ireland, Age Action, Active Retirement Ireland and SIPTU for their work and time on this important matter.

In addition to repealing the increase in the pension age, it will become important that we address the need for those who reach the age of 65 to sign on for a jobseeker’s payment. In recent months, I have been contacted, as have other Members, by women and men who have worked all their lives and now face the prospect of standing in a queue to sign on. This is something that so many of them have never done before in their lives. They also face the prospect of being called to participate in a job activation scheme. I am aware that the Minister intends to bring in regulations which will formally remove the current requirements for people aged 65 and over to sign on, participate in activation programmes or give an undertaking that they are genuinely seeking work. This will be welcomed by those who I have spoken to in recent months. The Minister might confirm the timeframe involved in bringing forward these important matters.

I welcome the inclusion in this Bill of the extension of the limit on the PUP to €960 for self-employed workers over an eight-week period, particularly for musicians, taxi drivers and all tradespeople. I acknowledge a recent presentation we received as members of the Joint Committee on Social Protection, Community and Rural Development and the Islands from Senator Black on this important matter on behalf of those in the music and entertainment industry and I acknowledge the many representations I have received from those in this industry. It is an issue I have highlighted through the committee, along with fellow committee members. Musicians and artists have struggled with previous limits and with holding on to their PUP. I agree that this will give them a chance to maintain this payment. We want to see our musicians and artists back playing and working under some sort of normality. I sincerely hope this change will make a difference to many of them until we see that normality return, hopefully quickly.

I wish to highlight the need to change the PUP to allow those workers under 18 to qualify for the payment, should they need to do so. I have previously raised this in the Joint Committee on Social Protection, Community and Rural Development and the Islands and I know it forms part of the recommendation on the PUP sent back to the Minister following the review of this payment by the committee. It is an issue that has been brought up with me locally several times. It must be reviewed so that those of this age who pay their taxes and PRSI and currently do not qualify will qualify.

Another area of this report that I would like to ask the Minister to consider is the issue of those who are self-employed and over 66 who are not eligible for a State pension. We must acknowledge those who wish to work beyond their 66th birthday but we must also assist them. These citizens should be deemed eligible for the PUP but I understand that currently they will not qualify for it.

There was a lost opportunity to increase the income limits for the carer’s allowance in the last budget. I have raised this with the Minister previously and I cannot let the opportunity pass without raising it once more. Figures I have received, along with Labour Party colleagues, tell us that 50% of all applications for carer’s allowance are being refused. One of the biggest reasons for this over a long period of time has been the income limits. I am dealing with a case in which a family are €5 above the limit. They had been refused twice before they came to see me. I have appealed this case and there is no doubt but that the loved one being cared for would be in State care if her daughter did not carry out the 24/7 care she is providing at this time in looking after her mother. She is like so many of the carers of the country who save the Government so much. This was recently estimated at €20 billion per year. It is time to reassess these limits and beyond time to increase them. The income limits have not been changed since 2012 and over 30,000 carers are being locked out of payment, according to figures recently released by Family Carers Ireland. We must increase these limits. Those caring must be paid for their work.

There is an acknowledgement in section 11 of this Bill of the magnificent work being carried out by those who are in receipt of carer’s allowance through a €150 increase in the carer’s support grant. I welcome this increase and as I have said previously, those involved in providing care go above and beyond each day. It is right to recognise that through an increased grant payment.

As has been mentioned, there is also a welcome increase of €3.50 in the fuel allowance. As the Minister will be aware, however, carer’s allowance is not a qualifying payment for fuel allowance. I ask her to look at this again.

I thank the Minister and her staff for the magnificent work they have done in recent months. They have gone above and beyond. I had the opportunity to make the same point recently at a meeting of the Joint Committee on Social Protection, Community and Rural Development and the Islands. On behalf of my party, I thank all the staff of the Department. I again welcome the work and commitment of the Stop 67 campaign and thank those involved.

All of us are worried about the longer-term effects this pandemic will have on our workforce, the availability of work in the future and the mental health consequences for those who have had to live apart and alone over many months during the pandemic. I continue to work daily with such families and individuals. Social protection and the Minister’s Department may have to play a greater role when we eventually fully understand the consequences of the pandemic. We all hope for a day when some sort of normality returns. We welcome the many updates and changes in this Bill, which we will support.