The number of secondary school places in South Kildare

May 25, 2021 markwalllabour@gmail.com No Comments Uncategorized

I welcome the Minister of State to the House to discuss a very important matter for many people in the county in which I live, Kildare. There is no doubt there is a problem there. It is acknowledged by the Minister for Education in replies to my Labour Party colleagues over the last year or so, and the direct conversations I have had with the Minister and her office. In acknowledging the problem in her replies, the Minister stated it could be caused by different factors, including duplication of applications where pupils have applied for a number of schools in the same area and where pupils cannot get a place in their preferred school, while there are places in other schools in the town or area. Some towns have single-sex schools and while places are available in the school, they are not available to all pupils or they draw pupils from outside the local area. One would expect much or all of this information to be available. The Minister went on to say only until these issues are discussed with the relevant school authorities will the true extent of any capacity issues become known. Unfortunately, this is the reply or a version of it I have continued to receive for over a year now, and still parents are without places. The latest waiting lists range from 20 to over 40 in some schools. The Minister continues to tell me that she is engaging with patron bodies to identify particular capacity requirements for the forthcoming year. I sincerely hope that there is some good news today.

I have been involved in campaigns for new schools in the area that have still not commenced, although I acknowledge a number of extensions of schools in the Kildare south area. However, there is growing concern around what is happening with the proposed new 1,000 pupil school for the Curragh which we were told would include joint Educate Together patronage. Recent updates on this school tell us that the land deal is still at a sensitive stage. Perhaps the House can be given an update on that today.

I hope the Minister of State will give us some good news here today. I have been contacted by parents as well as young people who are very upset that they do not know what school they will attend in September.

This is especially hard on the student, the young person, whose friends are aware of his or her school place and where he or she will be attending.

There are lessons to be learned here by the Department. The question put to me repeatedly is why Kildare County Council allowed all of these houses to be built without enough school places to accommodate the children in the families who came to live there? The south Kildare Educate Together secondary school campaign presented these projected growth figures to the Department a number of years ago. There was an obvious delay in acting upon them and there is no doubt about that.

We all welcome the school extensions and what we hope will be the urgent announcement on the new school in the Curragh, but that good news is a number of years away. Until then we need to create school places in existing schools and invest in these schools to accommodate that. We all await the Minister’s response as to how this might be achieved.

I thank Senator Wall. It is important to set out the context around the consideration of additional secondary school places, not just in Kildare but throughout the country. To plan for school provision and to analyse the relevant demographic data, the Department, as the Deputy may already be aware, divides the country into 314 school planning areas. It uses a geographical information system, using data from a range of sources, including child benefit and school enrolment data, to identify where the pressure for school places across the country will arise and where additional school accommodation is needed at primary and post-primary levels.

The most recent analysis, which I believe is interesting, undertaken by the Department projects that over 60% of the 314 school planning areas at primary level have stable or decreasing projected enrolments for the period to 2024. This can be contrasted with some 90% of the school planning areas at post-primary level that are anticipated to have increased enrolments for the period to 2027. The level of demand volume, therefore, across school planning areas with an increasing net requirement ranges from small to medium increases that are likely to be accommodated by existing schools, through to significant projected growth that may require additional provision.

Where our data indicate that additional provision is required at primary or post-primary level, the delivery of such additional provision is dependent on the particular circumstances of each case and may be provided either through one or a combination of the following. First, there is the utilising of the existing unused capacity within a school or schools. Second, there is extending the capacity of a school. Third, there is the provision of a new school.

As the Senator may be aware, since April 2018, the Government has announced 47 new schools to be established over a four-year period from 2019 to 2022, including two new post-primary schools to serve the school planning areas of Kilcock and Maynooth in County Kildare. I advise the Senator that the Department is aware of increasing pressures and demands for additional post-primary school places in a number of school planning areas, including in south Kildare. The Senator has quite correctly outlined what happened when capacity issues arose. It may not be as a result of a lack of accommodation. There is the duplication of applications, which the Senator has set out. He also talked about single-sex schools and the external draw. The Senator further mentioned that it is only when these issues are discussed with the relevant school authorities that the true extent of any capacity issue will become known.

Similar to the process adopted in advance of the current academic year, it is important to stress that the Department is engaging with patron bodies, including in the area in question, to identify particular capacity requirements for the forthcoming year which may necessitate action.

The Senator asked specifically about the Curragh Post Primary School. It is intended that significant additional capacity to address this demand will be provided by the planned new 1,000-pupil building for the existing Curragh Post Primary School. The school at present has an enrolment of 145 pupils. As the Senator may be aware, a new site is required for the replacement of the Curragh Post Primary School. This project is also proposed to address demographic need in the Kildare, Curragh and Newbridge school planning areas. Officials in the Department are in advanced negotiations at present with the landowner in respect of the acquisition of a suitable site to address the aforementioned needs. The Department continues to work closely with officials from Kildare County Council to progress the transaction under the memorandum of understanding, MOU, between the Department and local authorities for the acquisition of school sites with a view to securing a suitable site for the school.

Should agreement on the proposed acquisition be reached, the process will advance then to the conveyancing stage where draft contracts will be prepared and due legal diligence is undertaken in respect of the proposed transaction. It would be expected at that stage that the project to deliver the new school accommodation can simultaneously progress to architectural planning stage.

I thank the Acting Chair and I also thank the Minister of State for the reply. Unfortunately, we are not hearing anything new in the reply the Minister of State has given us today. These are the same replies that all public representatives who have been pursuing this issue have been receiving because it is a very significant one for us all in south Kildare. It is the same reply as the one we received one year ago which referred to the Department looking at, and talking to patrons about, additional places. Yet the pupils and their parents in south Kildare are still waiting on news on the 40 places and are trying to get places for September. 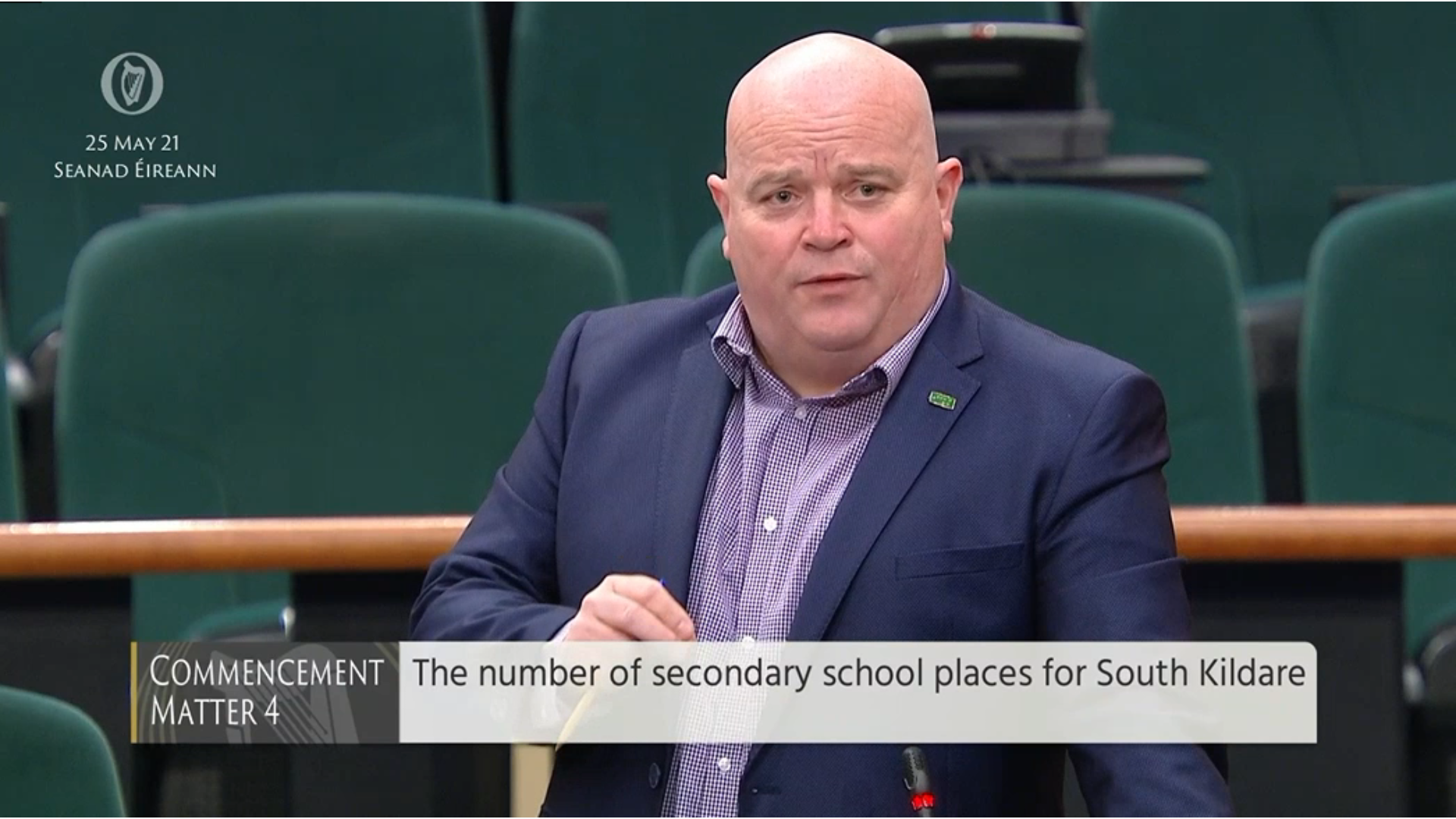 Will the Minister of State please go back to the Minister for Education and to the Department and ask them to be more forthcoming as to what is actually happening in south Kildare? We cannot continue to receive the same answer, year after year, month after month, on places. This was known back in 2014 and 2015, when the figures were brought to the Department, yet we are still looking at schools two years down the line, which are nonetheless very welcome. We need to get answers now, to solve this problem, to talk to patrons and ensure those who need places in south Kildare have them come September. We cannot wait any longer, but I thank the Minister of State for her reply.

I thank the Senator and I understand his concerns around clarity for students who wish to attend school, whether it is a primary or a post-primary school. The instructions I have from the Department specifically on the school mentioned by the Senator are that the negotiations are at an advanced stage on the site acquisition. I will obviously bring his views back to the senior Minister, Deputy Foley.

Furthermore, St. Conleth’s Community College has agreed to an additional first year class and the patron has agreed to the expansion of the school to cater for a total capacity of 1,000 pupils. There is also an accommodation brief for the major project in Cross and Passion College in Kilcullen, and that has been increased to cater for a 1,000-pupil school to provide for increased demographic growth. The accommodation brief for the Patrician Secondary School in Newbridge has also increased to a 1,000 pupils to provide for increased demographic growth. I will bring the Senator’s concerns to the attention of the Minister, Deputy Foley, and the Department.