I welcome the Minister of State to the House. It is his second time here today. I congratulate Senator Malcolm Byrne and his colleagues in Fianna Fáil on bringing forward the Bill. The Senator correctly said that in 2021 I introduced a Bill on behalf of the Labour Party on the use of the CCTV and the prosecution of offences. It was quite similar to what we have before us.

The bottom line on this is what happens next. We heard Senator O’Reilly state it is with a committee at present. When I introduced the Bill last year and we spoke on it we were told it would happen long before now. It is still with the committee. I know the Minister of State will respond on the Bill before us but what is happening simply cannot continue. The destruction of our countryside in rural communities continues unabated. Senator Cummins is correct that this is not a silver bullet. Nobody has ever said it would be a silver bullet. However, it would definitely help our local authorities to combat what they face day in and day out. There is absolutely no question about that. 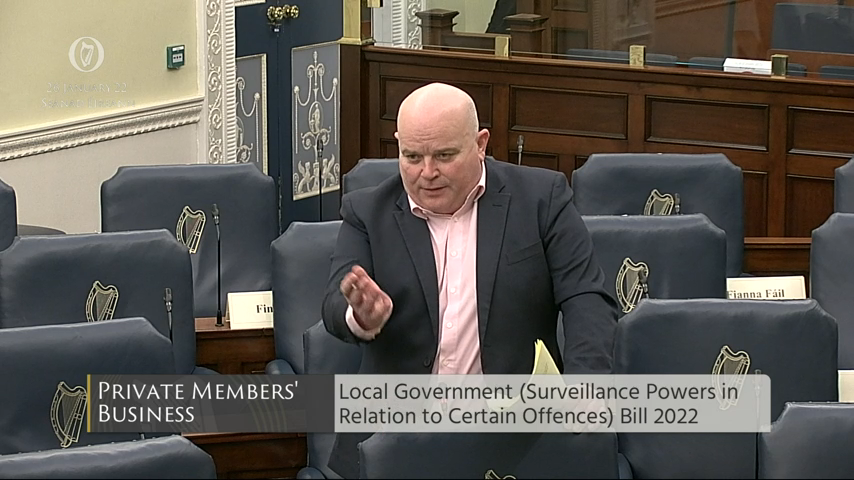 The Government has to act. Senator Byrne has outlined his research and I have done similar research. Our local authorities spend €90 million each year on cleaning up illegal dumping. Imagine what the local authorities could do, as I have said so many times, with €90 million. Imagine the playgrounds and community facilities we could upgrade and install if we had this €90 million back. This is the purpose of the Bill.

I acknowledge what Senator Boyhan said. I also had concerns when I drafted my Bill and spoke about them. The purpose of that Bill was to ensure there was a legal standing for the use of CCTV. Having read the Bill tabled by Senator Byrne, I know it has the same purpose. That includes the purpose of using and recording CCTV data and specifically who the CCTV may target. It is appropriate that Senator Boyhan has raised this issue and it had to be said. Having read the Bill and having written a Bill, I know it is for the purposes of dealing with illegal dumping and nothing else. This is all we are asking. We will not target anybody else. When Senator Byrne speaks again he will probably say the same. This is not to target any group or individual. It is to target those destroying our countryside and causing €90 million of local authority expenditure each year.

Several months before Christmas, Kildare County Council ran an amnesty for mattresses. It cost €50,000 to deal with the number of mattresses received on one day but within a week the countryside was destroyed once again with mattresses. Every day I am contacted about illegal dumping. This is no exaggeration. It is endemic throughout the countryside. There is no other way to say it. Housing remains the number one issue and it always will be as far as I am concerned but illegal dumping comes a very close second. We are here to introduce legislation. Senator Byrne has done the exact same as I did, which is to introduce a Bill to ensure this does not happen. If nothing comes back from the Government, we will continue to be in the same place, which is not acceptable.

In my local community there are approximately 400 houses just outside Athy. Six or seven months ago, we had a clean-up and we filled 350 plastic bags. That was in a small rural community. This just shows the type of dumping that is happening. At the weekend, I received a call from members of the community group saying we had to do another clean-up because the dumping is as bad as ever. That is within six months. I am sure that the next time we go out we will, unfortunately, fill another 350 bags. Again, I am not saying CCTV cameras will be the silver bullet but they would ensure that those who dump would think twice about driving out and dumping in the local community.

It is not just a problem in rural communities. It is also in towns and villages. The Minister of State knows the results of the Irish Business Against Litter survey. Naas did very well but other towns are suffering. Senator Cummins is also correct that there is an education element to this and it must accompany what we are trying to do with the Bill and what I tried to do last year. This is incumbent on the Minister of State. I engaged with the Minister, Deputy Ryan, a year ago in a Commencement debate. He told me he was rolling out various schemes. I am sure they are happening. An initiative mentioned by Senator O’Reilly is what we call the green kilometre in Kildare. It is a brilliant scheme. People look after the 1 km next to their home. It is a like a neighbourhood watch scheme in one sense. People look out for one another with regard to rubbish. A number of houses come together. It is a great scheme which creates great communities.

Tidy Towns has been mentioned. Councillor Thomas Phelan from Waterford contacts me regularly about what is happening. Councillor Elaine McGinty has written to a number of social media companies about those who advertise illegally for dumping. This has been mentioned by colleagues during the debate. She still has not received a reply. She has tabled motions at Meath County Council. It is unacceptable that social media companies allow people who are not registered to advertise illegal dumps. Unfortunately, this is what is happening. These people go around estates and flash their lights. People come out with black bags and, unfortunately, those black bags end up on our streets and in our countryside. This is what the Bill is targeting. It is what I targeted last year. I thank Senator Byrne.